Reviews of the food and drink venues we enjoyed in Manhattan, New York City during our November 2012 trip to the Big Apple.

This is often listed as the home of New York City’s best burger. The burger joint is located behind a black curtain in the hotel’s lobby and its dark diner decor with graffiti all over the walls is a massive contrast to the grandeur on the other side of the curtain.

Service isn’t the friendliest - though I wouldn’t be too cheery working in a confined space with an ever growing queue either. Take your place in the queue and hope to find a spare seat. When your order is ready your name is called and a brown paper bag is handed over with the merchandise.

The burger is undoubtedly good. It’s not the largest in Manhattan, but it’s nicely chargrilled on the outside and really good quality beef throughout. All served on a toasted bun. The fries are hard to fault too.

This isn’t a life changing experience and the burger isn’t the best I’ve ever had - but it’s a cool concept that’s executed very well.

I know New York City isn’t renowned for BBQ, but I was in America and wanted to try a proper BBQ. Apparently this place is based on Texas meat markets - you take your menu card up to the Pitmaster and he makes your order up, weighs it and delivers it wrapped in brown paper.

I had the Pitmaster combo for $26. It’s an intimidating amount of meat: brisket, pork rib, beef rib and a quarter chicken. The Kreuz Jalapeño cheese sausage I added was too much, but I wanted to try as much as possible. The sides were good too - with the corn pudding, baked beans and German roast potatoes particularly satisfying. The brisket and chicken were particularly good. For meat lovers I really don’t think you can go wrong with Hill Country.

We tried the ‘Texan favorite’ of banana cream pudding for dessert. This is like banoffee pie minus the toffee and biscuit base. It was good.

The atmosphere is terrific, the BBQ is superb and the beer is flowing. I absolutely loved Hill Country BBQ and if there is better than this on offer in Texas then I should try and book myself a flight as soon as possible!

This is a Chinese restaurant in New York’s gloomy and deeply atmospheric Chinatown. It seems most folk arrive to the restaurants here by cab, but we were happy to take the subway and wander the streets to absorb it all. Ping was recommended by our hotel concierge. It was a bad recommendation.

Ping is an old style Chinese restaurant, with fish tanks, white tablecloths and laminated menus splattered with photos of the dishes. The dim sum starters were large and reasonably priced - though I had a terribly fatty piece of pork in one of my Shui Mai. Prawns with vegetables for one of our mains was ok, but the serving of prawns was meagre and the dish was very basic. My beef casserole was a disaster. It was served to the table in a bubbling dish. Inside were many bones with tiny scraps of beef and cartilage attached. The meat was so poor quality I would have felt bad about feeding it to a dog.

I have been to China and sampled the food there. And yes I know the meat is not always the best quality - so if you want to justify this dish based on its authenticity, just remember this cost me $17. Still the bottled Tsingtao was good.

Maybe we just ordered badly. The couple behind seemed to be enjoying their pork ribs in a hollowed out pineapple. If I’m back in NYC I won’t give Ping another chance though.

Reservations are essential at this fashionable themed restaurant in New York’s Meatpacking District. You take a seat at the bar and wait until someone finds you (after asking most of the people at the bar what their name is) and escorts you to your table.

Interior wise Spice Market is great - wooden carvings, dim lighting and draped curtains. I’m not sure about the Aladdin style costumes of the waiters, but the restaurant has a theme and it sticks to it well.

I was warned that my starter of chicken wings were the hottest item on the menu - but I didn’t expect them to cause such pain to the interior of my mouth. This dish seemed out of keeping with the free flowing, fashionable vibe the Spice Market is clearly aiming for. Crab dumplings with sugar snap peas were far more enjoyable.

Both of our main courses were very good - though not huge portions - the duck was lean and cooked beautifully in my red curry and the red snapper was moist and fresh.

Unfortunately the area we were seated in was very cold. So cold we had to wear our coats. That’s not really acceptable. The bill at the Spice Market states that an 18-20% tip is customary. I understand waiters don’t get paid much in the USA, but as a visitor to the States I really think the tipping aspect is getting out of control. 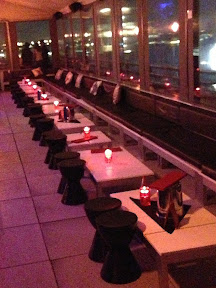 Super hip and trendy roof top venue with fantastic views over the Hudson River. There’s a pool at the side and very large terraces. One room hosts a DJ with a small dance floor - great acoustics and comfy seats - but no sofas unless you take the Gansevoort’s ‘bottle service’.

We visited on a Sunday night - there was still a burly bouncer checking ID, but he isn’t too selective on Sundays. I suspect this is the night when people who can’t get in on Fridays and Saturdays visit. Accordingly there were some people here I have no desire to spend any time in the near vicinity of - though that may well be the case every other night of the week! The bar is worth seeing, but it’s not life changing.

Dive bar with massive collection of bras behind the bar and a pool table in the corner. Bikini clad young women man the place - every so often they stand up on the bar and engage in some Coyote Ugly style theatrics. Again you’d probably need to see it on a Friday or Saturday night to see the best of it. I’m not sure if the concept here is genuinely cool or all a bit too contrived - it was funny when a couple had finished their drinks and were kissing each other though. The bartender very publicly told them to ‘get the f*** out the bar’ if they’d finished drinking. And so they did.

We did try and enter the rooftop bar at the Standard Hotel, but it was hosting a wedding. And the nightclub had gone ‘guest list’ only after 10pm. So that was the Meatpacking district.

Not the cheapest diner in town - in fact a young couple sat down, scanned the menu and then headed straight for the exit. But inside and out it looks just like the movies! The 15 bite hotdog is huge - but also very fatty - it dripped everywhere when biting into it. For the ‘wow that’s a big dog on your plate’ factor it’s a good dish. The turkey burger was an unqualified success - big serving and moist ground turkey. The corned beef and pastrami looked appealing.

I really should stop falling for ‘best in town’ style advertisements - the latest claim to dupe me was the Brooklyn Diner’s hot chocolate fudge sundae. It really was rubbish - very basic and within minutes it had become a liquid mess. Their super milkshakes offered some redemption.

On the sweet front we found three excellent places. Magnolia Bakery - there’s one of these in the Grand Central terminal food hall and another inside Bloomingdale’s. The brownie and cheesecake were both very good. Huge cakes too. Bouchon Bakery - part of the Rockefeller complex. Terrific pumpkin flavoured macaroon and the mini chocolate brownies (small gift bag available) were superb. Crumbs (various locations) - cupcakes are their speciality. The chocolate brownie version might have been over 500 calories, but it would be worth a month in the gym to experience its brilliance.

I’d always wanted to try this burger chain. It never happened in Washington DC, but I made sure it happened in NYC. Five Guys have clearly won a lot of awards, but the dIsplay of them didn’t show any from recent years. The branding is slick and clean - while the menu is small and to the point. You can have as many toppings as you like, at no extra charge.

A large burger is two patties. Fries are served with the skin on in an overflowing cup. It’s a good burger. Again not revolutionary, but it’s a neat place and yes I would prefer it to McDonald’s or Burger King.

Hale and Hearty is an extremely popular soup and sandwich shop. The variety on offer is wonderful and we thoroughly enjoyed a turkey and cranberry sandwich alongside a perfect butternut squash soup. Everything is available in different sizes, so you can mix and match - I wish they’d take this brand global.

As we weren’t paying for breakfast in the hotel we dined out each day. My rankings would be:

We missed out on a proper NYC deli experience - we never made to Katz and the Carnegie deli had a queue far too long - infact it was all the way out the entrance and down the street. Also we never sampled the food from the street corner sellers - we were always too full. But I gather there is some great value biryani and halal meals on offer via this route, if you do some research. Starbucks are everywhere - and yes we succumbed on a couple of occasions - mainly to use their free wifi!