A visit to London was long overdue - so we headed for 72 hours of sightseeing, tourist attractions and to stuff our faces full of food! 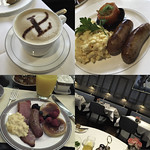 We stayed at The Langham hotel which is a 5 minute walk from Oxford Circus. A major plus point is being offered the choice of breakfast in Michelle Roux’s restaurant - The Landau. Here you get a small menu of a traditional English breakfast, pancakes or waffles. Good quality ingredients, neat presentation and everything cooked to perfection. There’s even a Michelle Roux jam on the table, but no sign of the man himself - maybe too busy frying the sausages and making the omelettes !? Our Langham Suite was quiet, large and had all the amenities you’d expect from a 5 star hotel. 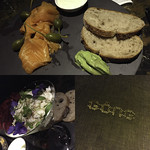 Friday night was spent on Level 52 of The Shard - specifically the Gong bar of the Shangri La Hotel. Take the tube to London Bridge station and The Shard is, more or less, connected. First you enter the lobby of the hotel and take an elevator to the 32nd floor, before swopping elevators up to the 52nd. Slightly bafflingly was the decision a member of staff took to search a tiny handbag - he seemed oblivious to the huge suitcases going by unchecked! To reach the £40 a head minimum spend we ordered the smoked salmon and crab cocktail. Both were excellent - but the crab was especially fantastically fresh and zingy. The staff were very good and moved us to a window seat as soon as one became available - cue beautiful panoramic views of Tower Bridge and The River Thames. You can also sit in the room with the pool and look east over London. I would recommend against this, as the “pool room” seemed devoid of atmosphere and the smell of chlorine hung in the air. The Shangri La Hotel is an impressive development; I think we’ll try its restaurant for a proper meal next time.

Madame Tussaud’s is a tourist attraction I’ve waited a long time to visit - and thankfully it did not disappoint. Sadly it seems pre-purchasing tickets means you join the longest queue (around 20 minutes) while buying tickets on the day guarantees immediate entry. The elevators deliver you onto the red carpet - cue waxworks, lights and music. Madame Tussaud’s really do a good job of bringing the waxworks to life - and I was pleasantly surprised at how interactive the attraction was. Where else can you have a photo with Bruce Willis, Elvis Presley, Henry VIII, Bobby Moore and Britney Spears to name but a few. You can touch the exhibits, walk around them, etc. This is maybe not a good thing for the model of Hitler though… The Spirit of London ride (you time travel through London’s history in a black cab) and the Marvel superheroes 4D movie were slick and enjoyable. Getting mx photo with a huge Hulk character was the undoubtable highlight! The scream chamber is really one for the hen parties though - here some Tussaud’s staff don makeup and wander around like they’re in a haunted lunatic asylum. Tussaud’s may be touristy, but it really set the tone for a great weekend.

Blood Swept Lands and Seas of Red at The Tower of London is a stunning art exhibit in its own right. As a reminder of the sheer number who died in World War I it’s solemn. We accessed via Tower Bridge underground station, which involved a 10 minute wait on the platform - such is this exhibition’s popularity. Above ground it was a case of slowly shuffling around the perimeter of the Tower of London. All the ceramic poppies have now been sold and I am pleased the proceeds will help those affected by war. The World War I Galleries exhibit at the Imperial War Museum is a fitting complement to the poppies at The Tower Of London. This is located on the ground floor and walks you through the events leading up to World War I, its major battles and the aftermath. Watch out for the poppy from the first fundraising appeal in 1923 at the end.

A quick stop at the Tate Modern (free entry except for special exhibits) and a photo stop outside St Paul’s cathedral heralded the beginning of nightfall. After leaving the Tate Modern we walked towards The London Eye, Houses of Parliament, Big Ben, etc. All historic monuments which look even more stunning at night. By this time our feet were aching, so hopped on a big red London bus back to the hotel - the bus found courtesy of Google Map’s reliable public transport directions. 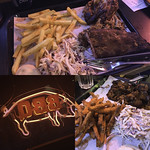 Bodeans BBQ, Soho is not comparable to Hill Country BBQ in New York City, but for Britain it’s good enough. Reservations are only taken for large groups, so we had to queue for 15 minutes or so to get a seat in their upstairs “deli”. Here you order at the counter and stick your hand up when your number is called. Burnt ends aren’t something I’d ever eaten before (I prefer proper brisket) and I probably wouldn’t again if Bodeans exemplars are the best you can buy - basically squares of beef, served in a thick sauce. The sweet potato fries, coleslaw, chicken and pulled pork were the “best in show”. This may sound like I didn’t enjoy the meal, but that’s not true - any place which serves copious amounts of meat is a place I’ll always visit. But I think London would benefit from some more BBQ competition. 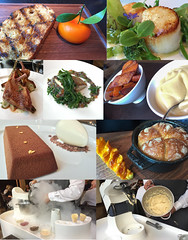 Dinner by Heston Blumenthal has two Michelin stars and is located inside the Mandarin Oriental hotel - the front of which neighbours the ludicrously priced and deserted One Hyde Park development; the back which has a beautiful view over Hyde Park. The glass enclosed kitchen is like watching an ant colony in full swing. Here the ants hang up pineapples to roast or inspect the food with electronic thermometers. I cannot find a single fault with this restaurant.

Food highlights include the wondrous scallop starters and meat fruit - a terrine of fois gras served in a fake mandarin, alongside perfect bread (I liked the way more was offered without me having to ask). I don’t usually make a habit of having two desserts, but we just had to try the nitro ice-cream. Here liquid nitrogen is poured into a mixing bowl as the handle of a 19th century sewing machine is turned to produce a spectacular “smoke” display. The ice cream tasted great and there wasn’t an ice crystal to be found. I could describe each dish in detail, but here the pictures really can do all the talking.

The narrower roads and huge traffic congestion of Knightsbridge always makes me wonder why the mega-rich choose this area in preference to others. Anyhow we made a quick stop at Harrods and window shopped at the McLaren showroom before heading back to Oxford Circus on another big red London bus. 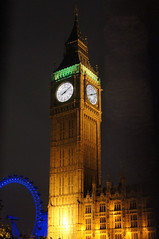 Lindsay Lohan and Richard Schiff (Toby from The West Wing) were starring in David Mamet’s “Speed The Plow” play at London’s Playhouse theatre. We joined Jonathan Ross and David Baddiel in the audience for the Saturday afternoon matinee. It’s undoubtable that many in the audience were there to see Lindsay Lohan - an Hollywood actress with a controversial past is guaranteed to sell tickets I guess. The play has quick dialogue and a late injection of drama and aggression. I still don’t know if it’s good or not. Schiffer, an actor I admire, seemed slightly miscast and Lohan nervous. Whether that was just her in character I really don’t know. I believe the story was set in 1988 and involves an Hollywood producer torn between making loads of cash with a surefire hit or taking a risk on an adaptation of a book he’s only giving a “courtesy read”. At the end of the play I really couldn’t understand what the big deal was - why couldn’t he just make both movies!? The positives are the Playhouse theatre is lovely and I have thought about the play afterwards - so by those measurements it’s worth a watch.

I’ve fallen for “world’s best” proclamations before - but, for a change, I can see why the Langham’s Artesian bar walked away with the “World’s Best Bar” title. I mean where else can you drink a cocktail from a plant pot or sip a flavour changing concoction from a pipe protruding ceramic cup? That said, for £17 a cocktail I would expect something more than a Long Island Ice Tea - infact I felt I deserved the complementary canapes and bottomless bowls of crisps and nuts. One cocktail I tried had the taste of curry in a cocktail. Yes curry in a cocktail. But it worked! Kudos to the barman. I wouldn’t go to the Artesian bar every weekend, but for a special occasion it’s a bar you can really spend a long time in. Be warned: it’s difficult to get a seat here late at night, as it operates a “walk-in” policy (unless you’re rich and famous, in which case they’ll whip out the reserved signs). 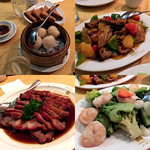 When in New York City the recommendation we received for a restaurant in Chinatown was woeful, but we had better luck this time with Imperial China. This is a modern Chinese restaurant - so you won’t find yourself plonked on any communal round table. Entry is by walking over a traditional Chinese bridge. Service was a little shaky in places, but the prawns with vegetables and duck with pineapple tasted good, even though the duck serving could have been more generous. No such complaints with the char sui - a gigantic serving for just over £8. Given some horror stories I’ve heard of Chinatown meals gone wrong I think you will find Imperial China a reliable choice. 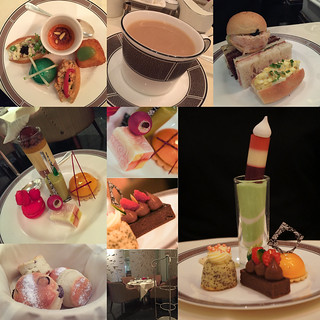 The Langham proudly proclaim that the tradition of Afternoon Tea started in their Palm Court restaurant 150 years ago. What is sure is that afternoon tea would not have looked like this last century. Choose either the bijoux afternoon tea (for slightly off the wall flavours) or the more traditional wonderland afternoon tea. The desserts are delivered immediately and placed tantalisingly at the side of your table as you work through the sandwiches and scones - a task hindered by the offer of refills. I consider my tummy lucky not to have been asked to pay for excess baggage later on. Wow! The sandwiches, especially any with lobster or crab inside, were superb. I’m not normally precious about things like this, but here the cakes genuinely did look too good to eat. The only slight disappointment were the scones - not quite fluffy enough and could have done with some more oven time. This was my first afternoon tea experience in London, so I don’t have a league table to add the Langham to - however, I cannot imagine many places could better this exquisite offering.